Top-seeded players Carlos Alcaraz and Anett Kontaveit gained their first-round matches at the Hamburg European Open on Tuesday, while Emil Ruusuvuori had an upset win over Diego Schwartzman.

Alcaraz, 19, dropped the first set but recovered to win 3-6, 6-1, 7-6 (3) versus 259th-ranked German wild card Nicola Kuhn. His second-round opponent at the clay-court event will be Filip Krajinovic.

Playing as the top-seeded player in an ATP tournament for the first time, Alcaraz stated it was difficult to adjust to playing on clay again after his run to the fourth round on the grass at Wimbledon.

Ruusuvuori won 7-5, 6-4 versus third-seeded Schwartzman, who was coming off a 6-1, 6-0 loss in his last match against Pablo Carreno-Busta last week at Bastad.

Kontaveit started her campaign in the women’s draw with a 6-3, 7-6 (3) win over Irina Bara despite losing her serve four times and next plays Rebecca Peterson.

Kontaveit started the season strongly but has struggled since a coronavirus infection in April and was 1-3 in her previous three tournaments including the French Open and Wimbledon.

Second-seeded Barbora Krejcikova, the 2021 French Open champion, defeated Magdalena Frech 6-3, 6-0 in the second round and will face either Anastasia Potapova or Maria Lourdes Carle in the quarterfinals.

Eighth-seeded Andrea Petkovic beat Misaki Doi 6-4, 6-3 and will play either Kontaveit or Peterson in the quarterfinals.

Alexander Zverev’s nickname is ’Sascha’, but for now you can call him ‘The King Of Cologne’.

The World No. 7 acquired his second title in as many weeks in the German city on Sunday, defeating second seed Diego Schwartzman 6-2, 6-1 for the bett1HULKS Championship crown.

“I know in finals you have to play your best tennis to have a chance, so obviously [I am] extremely happy with my performance. Probably the best match of the past two weeks here. Diego is someone that you can really struggle with. He is somebody who doesn’t miss from the baseline,” Zverev said. “You really have to win the match against him and I felt like that’s what I did.”

When Zverev arrived at the bett1HULKS Indoors last week, he was fresh off a disappointing fourth-round loss at Roland Garros versus Jannik Sinner. But the German made himself at home in more ways than one in Cologne, winning all eight of his matches to double his ATP Tour title count in Germany to four.

The 23-year-old is now a 13-time tour-level champion. “Being back in Germany is obviously amazing,” Zverev said. “I’m looking forward to the rest of the season.”

In both Cologne ATP 250s, Zverev saved his best tennis for the championship match.

Last Sunday, he cruised by Felix Auger-Aliassime. But his best performance from his two tournament victories came versus the red-hot Schwartzman.

Zverev played scintillating tennis, aggressively going after the ball to hit through the speedy Argentine. The German sometimes relies on his defensive skills to win matches, but he took it to the World No. 9 without hesitation, winning all seven of his service games en route to an impressive one-hour, 11-minute triumph.

“Today was a day when I felt like I could try things out on the court and a lot of things were working,” Zverev said. “I’m obviously very happy with how I played.”

“It’s getting better,” Zverev said of his form during the trophy ceremony. “I think we’re going to be on top of the game very soon.” This is the third time Zverev has captured an ATP Tour title in back-to-back weeks. He also did so in August 2017 (Washington, Montreal) and May 2016 (Munich, Madrid). 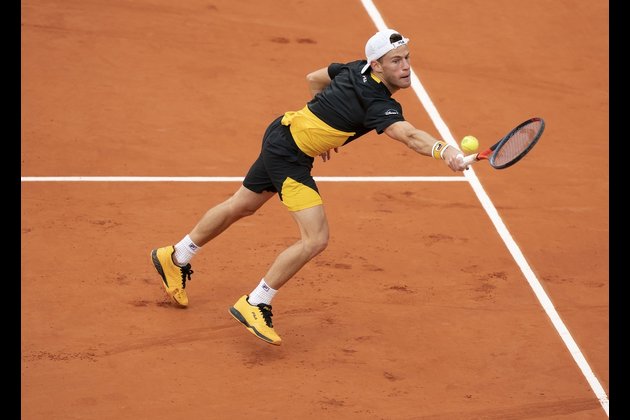