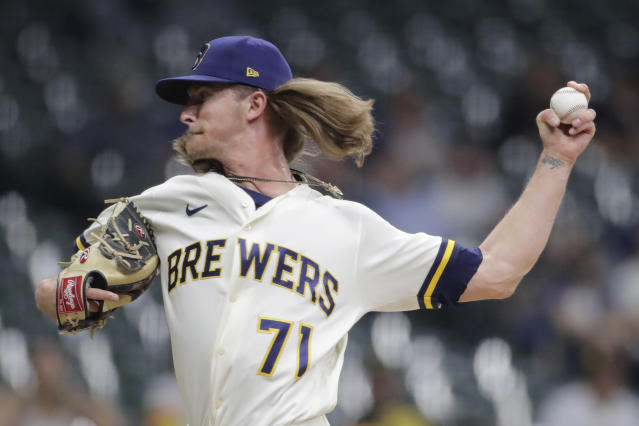 Fresh off sweeping a nine-game homestand, the Padres trailed 5-0 going into the ninth.

Tommy Pham hit a two-run homer off Angel Perdomo in the ninth. Hader relieved with a runner on first and no outs, and gave up Eric Hosmer’s RBI double with one out and then a walk.

Hader settled down to retire Austin Nola on a popup and Ha-Seong Kim on a lineout for his 11th save of the campaign.

Brandon Woodruff (3-2) gave up three hits over seven innings versus a Padres team that had won 12 of 13. He struck out eight and walked none.

Woodruff hasn’t permitted a run in three of his nine starts this season.Manny Pina hit a two-run homer in the second off Blake Snell (1-1).

Avisail Garcia led off the fourth with a homer and Kolten Wong’s two-out, two-run single later in the inning finished Snell.

Keston Hiura went 1 for 3 with a walk and scored a run as he returned to the Milwaukee lineup for the first time since being sent to Triple-A Nashville this month after batting .152 with a home run and five RBI. In nine games for Nashville, Hiura hit .438 with six doubles and three home runs.

“Obviously, that first month wasn’t an ideal situation for me,” Hiura said. “It was more trying to clear my head, get things right. I knew things weren’t far off.”

Dinelson Lamet will return from the bullpen to start Friday when the Padres face the Astros in Houston. San Diego manager Jayce Tingler is turning to a six-man rotation with his team playing 20 straight games without a day off.

“It’s good for everybody,” Tingler said. “Look, things can change quickly, but as of right now, I like the idea of everybody getting an extra day of rest in between their starts.”

Lamet made three starts and worked out of the bullpen twice in an effort to ease him back to form following a strained elbow ligament last September.