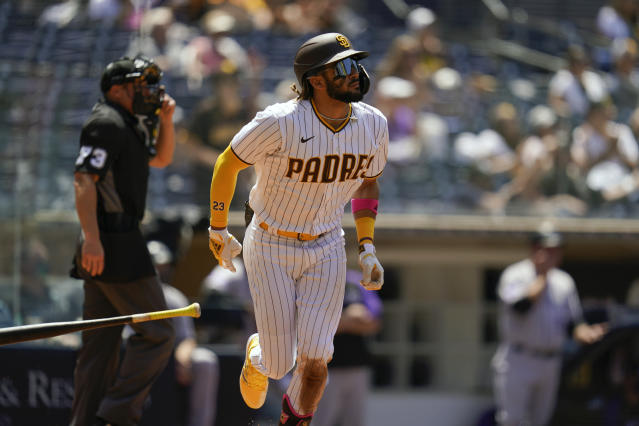 Fernando Tatis Jr.’s return from the COVID-19 injury list was nothing short of extraordinary.

Cleared to play by Major League Baseball late Wednesday morning, the star shortstop got to the ballpark about an hour before first pitch, took a few swings in the batting cage and then played for the first time in 10 days.

Tatis hit a remarkable home run, went 4 for 4, finished a triple shy of hitting for the cycle and even did the splits after stealing second base, leading the Padres over the Colorado Rockies 3-0 for a three-game sweep.

Tatis missed eight matches. Forced to isolate at home, he said he was able to take just a few dry swings and went jogging one day. Otherwise, he said he did his best to stay mentally sharp.

“It’s crazy. It’s crazy,” the 22-year-old Tatis said. “I was even feeling like kind of weird at shortstop, like, ‘Damn, is something looking different or is it just me?’ It’s a thing when you’re far from the game, but here we are, healthy, thank God.”

Tatis, who had been out since May 11, helped the Padres win their sixth consecutive game and for the ninth time in 10 games.

Jake Cronenworth had an inside-the-park home run and Joe Musgrove struck out 11 in seven innings. Craig Stammen struck out the side in the eighth, and Mark Melancon finished the two-hitter with a perfect ninth for his major league-leading 15th save in as many chances.

Manager Jayce Tingler said what Tatis did Wednesday “is incredibly unique. I don’t know how to explain it. There’s not many that can kind of roll out and be able to do that.”

Tatis came up in the eighth needing a triple for the cycle and got his third extra-base hit of the game, an RBI double. He did a little dance after reaching the bag.

“It would have been great if we would have checked the cycle out of my things to do list but we were a little short and it’s definitely something I’m looking to the future for,” Tatis said.

The Padres were 7-1 without Tatis, who was placed on the injured list before a match at Colorado on May 11. Right fielder Wil Myers and first baseman Eric Hosmer were pulled from that game, Myers after he returned a positive test and Hosmer due to contact tracing.

Tatis and Hosmer were activated before Wednesday’s match and Myers is expected back this weekend. Jurickson Profar and Jorge Mateo, also placed in the contact tracing protocol on May 11, returned Monday night.

Tatis drove the first pitch he saw from Chi Chi González to right-center field with two outs in the fourth for his 10th homer. Tatis, batting cleanup for the first time in his three-year big league career, singled leading off the second and then stole second, doing the splits after sliding feet-first.

The Padres have encouraged Tatis to cut back on head-first slides after he experienced left shoulder discomfort during spring training and then suffered a partially dislocated left shoulder on a hard swing on April 5 that landed him on the 10-day injured list.