Cincinnati Bengals quarterback Joe Burrow, who underwent reconstructive left knee surgery in December, is “all systems go” for the Sept. 12 regular-season opener versus the Minnesota Vikings, according to Dr. Neal ElAttrache of Kerlan-Jobe in Los Angeles.

“He’s on track for full go for start of the season,” ElAttrache, who operated on Burrow in December, wrote in a text. “He’s doing all the work. He’s worked his tail off and been an amazingly mature participant in his recovery. He’s focused and great to work with.”

Burrow had told “The Cris Collinsworth Podcast” that he expected to be there for the first snap in 2021. But now ElAttrache is working with the Bengals’ medical staff on Burrow’s rehabilitation, and they consider that goal is well within reach.

Doctors do not want any contact until nine months, which could lead to Burrow sitting out the preseason.

But the goal, now well within reach, is to be ready for the start of the regular campaign.

“We are very happy with his recovery to say the least,” ElAttrache said. “Notwithstanding the nature of his injury and extent of his reconstruction, his knee is performing perfectly.

“We just had him tested out here with a high-tech video and biomechanical evaluation and he was ahead of where we anticipated and well into the return to performance phase of his recovery. With him already performing this way, it’s ‘all systems go’ for the start of the season.”

Burrow suffered the injury during a Nov. 22 loss at Washington. He then underwent surgery Dec. 2. Before the injury, Burrow had validated his draft selection as the No. 1 overall pick in 2020, starting 10 games and completing 65.3% of his passes for 2,688 yards, 13 touchdowns and five interceptions.

Bengals quarterback Brandon Allen will take over for the injured Joe Burrow as the team’s starter, a source confirmed to ESPN on Wednesday.

Allen, who has spent the entire campaign on the practice squad, will be making his fourth career NFL start on Sunday versus the New York Giants. The other three starts came with the Denver Broncos last season.

A sixth-round pick in the 2016 draft, Allen was picked up by the Bengals during training camp as a contingency option due to COVID-19. He was among the team’s final preseason cuts and was added to the practice squad.

NFL Network first reported that Allen would start for the Bengals. After the Bengals selected Burrow with the top overall pick in the 2020 draft, they opted not to add another quarterback to the 53-man roster.

On Monday, Bengals coach Zac Taylor said Allen filled that void because of the promotions allowed from the practice squad this season.

“Whether he’s on the active roster or the practice squad doesn’t really matter,” Taylor said. “He’s still in the room doing that kind of stuff.”

Allen and Taylor have a familiarity with each other.

The two were with the Los Angeles Rams in 2017 and 2018, when Taylor was an assistant coach. Taylor noted Allen’s experience with the team’s system when discussing the quarterback options for the rest of the season.

Burrow was placed on injured reserve Monday after he tore multiple ligaments in his left knee during last weekend’s 20-9 defeat to Washington. A timetable for Burrow’s surgery or eventual return is still uncertain.

Allen earns the nod as Cincinnati’s starter over second-year quarterback Ryan Finley. Finley, a 2019 fourth-round pick, started three games in 2019 as the Bengals evaluated their quarterback options ahead of the 2020 draft.

Finley served as the team’s primary backup quarterback the past two seasons but was 3-of-10 passing for 30 yards versus Washington.

“He’s in a tough spot there in the second half, but that’s life as a backup quarterback,” Taylor said. “You’ve got to get yourself ready to go. There’s things that I wish I could put him in a better position to get a better opportunity, but the bottom line is we didn’t get it done and weren’t able to get any points there in the second half to help us win.”

Also Wednesday, running back Giovani Bernard was held out of practice with a concussion, the team said. It wasn’t clear if he would be able to play versus the Giants. If not, the likely starter would be Samaje Perine.

The nightmare for Cincinnati happened on a Sunday afternoon in Maryland.

Quarterback Joe Burrow injured his left knee in the third quarter of the Cincinnati Bengals’ game when he was hit in the pocket shortly after releasing a pass to wideout Tyler Boyd.

Burrow was on the ground writhing in pain as the Bengals medical staff immediately rushed to the field. A few moments later, Burrow was helped up and was unable to put any weight on his left leg as he was placed a cart. The entire Bengals team gathered around Burrow to show their support before Burrow exited the field on the cart.

The Bengals formally declared Burrow out minutes later. Second-year quarterback Ryan Finley substituted Burrow under center — and he will presumably conclude the year as the team’s starter.

The initial diagnosis is Burrow suffered a torn ACL in his left knee. NFL Network first reported the news at the conclusion of the 20-9 loss.

Burrow finished the contest 22-of-34 passing for 203 yards and one touchdown pass.

The Bengals were ahead 9-7 when Burrow left the game with a little under 12 minutes remaining in the third quarter. His injury was the turning point in the game.

“That’s an injury to a team leader that can take the wind out of your sails,” Bengals coach Zac Taylor said postgame.

Burrow was one of the most hit quarterbacks in all of football entering Week 11. The rookie QB was sacked 32 times in 10 matches, that’s the third most in the NFL.

“I hope he recovers soon because he’s a hell of a player and it’s been a lot of fun watching him play this first half of the season, so excited for when he’s back,” Finley said postgame. “I think he’s a competitor. I think he’s going to be one of those guys that will be back before he’s supposed to, whenever that is.”

Unfortunately for the entire Bengals organization, Burrow’s rookie season is presumably done. He’ll won’t be back on the field until the 2021 campaign. 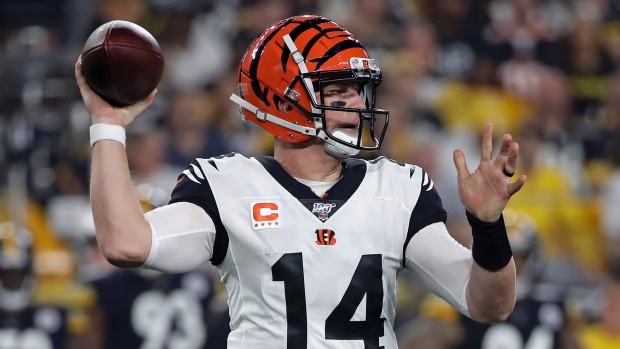 Joe Burrow ready to compete to be Bengals’ starting QB

The Cincinnati Bengals have their next franchise quarterback. And the duty ahead of him could not be any clearer.

Months of speculation concluded Thursday night when the Bengals selected former LSU standout Joe Burrow with the first overall pick in the NFL draft. With this year’s event taking place virtually because of the coronavirus pandemic, Burrow celebrated with his family and put on a Bengals hat from his home in Athens County, Ohio.

“That’s exactly how I expect to do it as well,” Burrow stated during a teleconference with local reporters. “I’m going to come in and compete and try to be the best player I can be.”

Burrow is coming off a historic season at LSU during which he threw for an FBS-record 60 touchdowns as he led the Tigers to a national championship.

He also completed 76.3% of his passes and won the Heisman Trophy.

He inherits a team with an unsure future at the starting quarterback spot. Veteran Andy Dalton, who has been the team’s primary starter since he was drafted in 2011, is entering the final year of his contract. Dalton’s $17.7 million salary will put the Bengals over the cap limit.

Taylor didn’t want to go as far as naming Burrow as the team’s Week 1 starter. Taylor said one of the biggest challenges for Burrow and the rest of the incoming rookie class is adapting to the speed in the NFL, even for players such as Burrow who played at college football’s highest level.

Burrow is the 318th No. 1 overall pick in NFL, NBA, NHL, MLB, WNBA and MLS history. But he’s the first to win national player of the year and a national title, and break a single-season NCAA record in his final college season.

Burrow stated he isn’t worried about being burdened by the pressure of leading the Bengals back to playoff success.