Charley Hoffman and Mark Hubbard each had 13 points in the modified Stableford scoring system to share the first-round lead in the Barracuda Championship.

Hoffman and Hubbard each had seven birdies and a bogey at Tahoe Mountain Club in the second of two consecutive U.S. events co-sanctioned by the European tour.

Players receive eight points for albatross, five for eagle and two for birdie. A point is deducted for bogey and three taken away for double bogey or worse. Hoffman closed his afternoon round with a birdie on the par-4 ninth. The 45-year-old former UNLV player has four PGA Tour victories.

“It’s just nice to be able to play golf,” said Hoffman, coming off a tie for 69th last week in the Scottish Open. “This year has been a tough year, with back issues. Back feels OK, so when it feels OK I want to play, so that’s why I’m playing. “

The 33-year-old Hubbard is winless on the PGA Tour.

He was third last week in Kentucky in the Barbasol Championship.

“I feel comfortable out here.” Hubbard said. “I’m from Colorado. I’m good with elevation, went to school (San Jose State) two hours from here, so it kind of feels like a home event, anyway.”

Former Pepperdine player Joe Highsmith had seven points in his first PGA Tour start as a professional. He’s playing on a sponsor exemption. 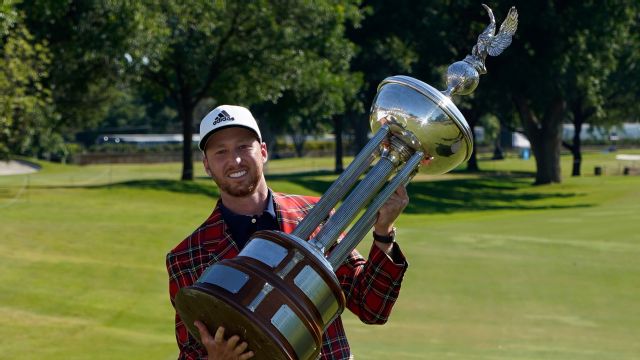 Daniel Berger was playing some of the best golf that no one noticed. Three months away because of the COVID-19 pandemic didn’t slow his momentum, and he made it pay off Sunday with a triumph at Colonial.

The PGA Tour made a healthy return to golf at the Charles Schwab Challenge with a somewhat sickly finish. Berger saved par from behind the 17th green on the first playoff hole and won when Collin Morikawa missed a 3-foot par putt.

Berger closed with a 4-under 66, his 28th consecutive round at par or better dating back to Oct. 11 at the Houston Open.

Even over the final hour, a half-dozen players were still in the mix. All that was missing was the sound and energy of a gallery, with the PGA Tour not allowing fans for the opening five events in its return. Berger won for the third time — all victories during this week on the calendar, just not in circumstances like this. It was the first PGA Tour event since March 12 when the spread of the new coronavirus shut down golf and other sports.

From no positive tests to a dynamic end at history-rich Colonial, PGA Tour Commissioner Jay Monahan sized up the week by saying, “This has been a phenomenal start to our return.”

Morikawa has been equally steady. Since graduating from Cal last year, he has won and made every cut, a streak now at 21 events, the longest streak by a newcomer since Tiger Woods.

He took a share of the lead with a 50-foot putt on the 14th hole. It was the short ones that hurt. Morikawa also missed a birdie putt from 6 feet on the 18th hole in a 67.

Berger was the only one who delivered, making a 10-foot birdie on the final hole that put him at 15-under 265. The last time Berger was in a playoff, Jordan Spieth holed a bunker shot to defeat him at the Travelers Championship. So he could feel for what Morikawa felt int he loss. “It’s going to hurt for a little while, but he’ll get over it and he’ll be winning again,” Berger said.

On June 11th, the City of Snoqualmie revealed the 2020 Boeing Classic – the longstanding PGA TOUR Champions event held at the Club at Snoqualmie Ridge (benefitting Virginia Mason programs and services) – will not happen this summer due to the COVID-19 pandemic.

The tour stated the cancellation was “out of an abundance of caution for public health and safety amid the COVID-19 pandemic.”

Originally organized for the week of Aug. 17th-23rd. organizers of the event will instead focus on a successful return to the Champions Tour calendar in 2021. According to the news release, “The decision was made jointly with state and local health officials, as well as the PGA TOUR.”

“While we are deeply disappointed to cancel the 16th annual Boeing Classic, this is the right thing to do given the uncertainty for large public gatherings in our state and the need to protect our players, fans, sponsors and volunteers,” said Boeing Classic Tournament Director Brian Flajole.

Since 2005, the tournament has raised nearly $10 million for local charities, including its main beneficiary, Benaroya Research Institute at Virginia Mason.

The weeklong event features the Seattle Seahawks Rumble on the Ridge golf tournament, as well as a variety of activities culminating in the PGA TOUR Champions event where legends of the game compete for a $2.1 million purse.

“The Boeing Classic is a community tradition in the Puget Sound region and a charitable event showcasing some of the greatest senior golfers in the world,” Flajole said. “The health and wellbeing of fans, players, staff and volunteers is of utmost importance to The Boeing Classic and all our partners. We are looking forward to the return of the Boeing Classic in August of 2021.”

This year was set to be the 16th playing of the only professional golf event held annually in the state.