The No. 13 on his jersey, James Harden won so many matches for the Houston Rockets.

On Wednesday night in the first meeting with his former team, No. 13 had a triple-double for the Brooklyn Nets to send the reeling Rockets to their 13th consecutive loss.

“A lot of mixed emotions from the fans but I knew that was going to happen,” Harden said. “I just wanted to come out here and give them a show.”

He did that with 29 points, 10 rebounds and 14 assists in the 132-114 triumph. The Nets set a franchise record with their seventh straight road victory. They’ve won 10 of their last 11 overall.

Harden has meshed well with his new team and the Nets are 17-7 since the trade. “So far, so good,” he said. “It’s everything that I signed up for. Top to bottom it’s been great.”

It’s the longest skid for the Rockets, who had just eight players available because of injuries, since they dropped 15 in a row in 2001. They’ve had a tough time since Harden was traded Jan. 14 and haven’t won since Feb. 4.

The Rockets used a 10-0 run, with five points from John Wall, to cut the lead to eight with about eight minutes left in the fourth. But the Nets scored the next eight points, with two 3s from Harden, to extend it to 113-97 midway through the quarter.

It’s the eighth triple-double for Harden this season and his second straight after he had 30 points, 14 rebounds and 15 assists without a turnover in an overtime triumph at San Antonio on Monday night. He didn’t play as clean of a game Wednesday when he had eight turnovers.

Harden got a mixed reception from the crowd.

Many of the 3,615 fans booed when he was introduced before the game and more boos came the first few times he touched the ball.

He stated it was a “little weird” being on the visitor’s side but denied having any extra emotions.

The Rockets played a video showcasing some of the countless highlights of his eight seasons in Houston during a timeout in the first quarter. There were more cheers than boos as it played. Harden stepped out of the huddle and raised his arms before placing his hands in a praying position to acknowledge the fans as it ended.

“You could tell it meant something to him,” coach Steve Nash said. “This place is special to James. Houston means a lot to him … so I know it was a big game for him. I was proud of the way he handled it.”

Wall had a season-high 36 points, and Victor Oladipo also set his season high with 33.

Houston coach Stephen Silas stated the strong play of those two stars is an encouraging sign amid this difficult stretch.

“It lets us know that when we get back and we’re healthy and we’re whole and we are in a position where we have enough guys to compete we’re going to be just fine,” he said.

Indiana Pacers guard Victor Oladipo initially ruled out a return for the NBA restart in Orlando, but the two-time All-Star now says there’s a “strong possibility” that could change, though he remains unsure.

“It was hard for me to assess where I was at from the long layover, and obviously [with the coronavirus], couldn’t really control that. But now, coming down here and getting some practices in, getting my feet under me, going out there playing with the guys, there’s a possibility that I could play,” Oladipo told reporters during Wednesday’s Zoom availability.

Oladipo first planned to travel with the team to Orlando while continuing rehab on his quadriceps tendon, but now his “body’s feeling good,” with no limitations from head coach Nate McMillan during practices. He’s trying to give it a go.

Even before traveling to Orlando, the Pacers included him on their travel party list as they worked through his options.

President of basketball operations Kevin Pritchard and GM Chad Buchanan have publicly supported Oladipo, saying the decision was his to make and giving him no set deadline, despite multiple sources confirming to ESPN’s Brian Windhorst that there in an unresolved situation regarding $3 million in salary.

The union feels he should be paid his remaining salary, while the league believes he should not be, according to Windhorst. Either way, Oladipo says returning to basketball is his main focus, not the money.

The Pacers are willing to pay his salary whether or not he plays for the remainder of this shortened season, sources told Windhorst. So there’s no real pressure either way. “These people have been amazing since the day I put on this jersey. It’s no surprise that they back me and they support me,” Oladipo said.

“It’s an amazing organization, amazing people. So I’m just thankful that they’ve got my back. That’s not necessarily a given thing when you’re in a situation like I am, so I just want to let them know that I appreciate that for sure.” 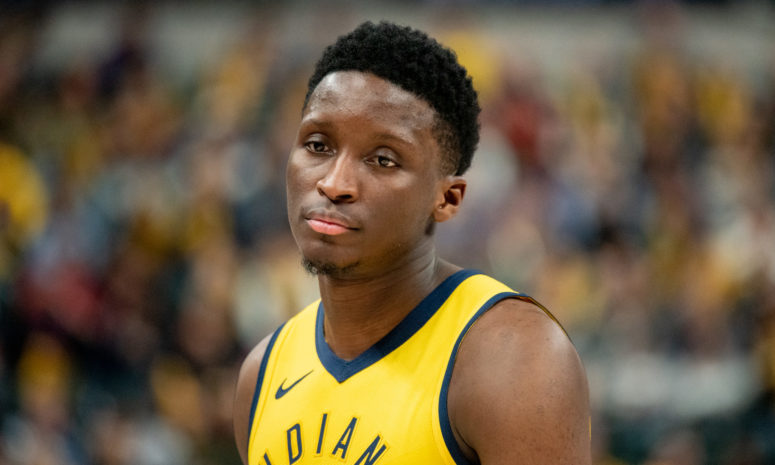 Pacers’ Victor Oladipo to ramp up activity before committing to restart

All-Star guard Victor Oladipo plans to ramp up activity with the Indiana Pacers beginning next week and evaluate his repaired torn quad tendon before to making a final commitment to playing in the season’s restart in Orlando, he told ESPN on Saturday.

Oladipo, 28, is hopeful to return to play with the Pacers, but prefers to limit the risk of significant injury after returning in January from a full year of rehabilitating the torn right quad tendon.

“I feel a whole lot better,” Oladipo told ESPN. “I know there’s risk going into it with the unique situation that I’m in — being off so long and trying to ramp it up that fast. I’ve just got to be smart, that’s all.”

The Pacers have been cautious and working cooperatively with Oladipo throughout his rehab and return, and plan to keep closely monitoring and managing his recovery with the looming restart.

Players must inform teams by Wednesday if they plan to participate in the season’s 22-team restart in Orlando — and teams must provide the league a roster of eligible players by July 1. However, Oladipo and the Pacers can push a decision on his return through the month of July as he ramps up in Indianapolis and Orlando for training camps.

Indiana would simply keep Oladipo on its active roster until a decision is made.

A team can sign a substitute player from an eligible pool of players to replace a roster player — and that replaced player will be ineligible to return.

Oladipo had his best match of the season — 27 points versus the Boston Celtics — in his last performance prior to the March 11 shutdown of the campaign.