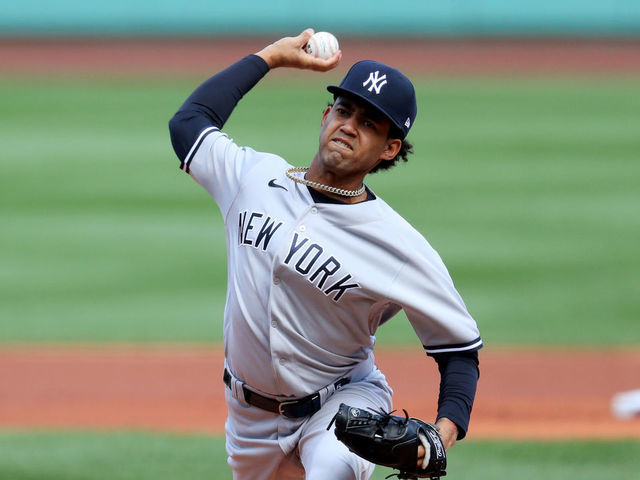 By taking the mound in Game 2 of the American League Divisional Series versus the Tampa Bay Rays on Tuesday, rookie Deivi Garcia will make history.

The 21-year-old Dominican-born pitcher will become the youngest player to make a postseason start in New York Yankees franchise history (at 21 years and 140 days).

Despite only six major league starts under his belt, manager Aaron Boone said he opted to go with Garcia due to the maturity he has displayed this campaign.

According to research by ESPN Stats & Information, the only other 21-year-old to make a postseason start for the Yankees was Whitey Ford in Game 4 of the 1950 World Series (21 years, 351 days).

“We deliberated on that a lot over the last several days,” Boone stated Monday ahead of Game 1 of the ALDS at Petco Park in San Diego.

“Masa [Masahiro Tanaka] will now go in Game 3. So just like slot and Deivi in between [Game 1 starter Gerrit] Cole and Masa was the way we wanted to go.

“I think the way he’s pitched, and the way he’s handled himself and handled every situation so far. I felt like I wanted to go this way a couple days ago but wanted to continue to flesh it out because we could. Ultimately today, this morning, decided this is the way I wanted to go. I just felt [we had] a lot of good options there, [different] ways we could have gone. I don’t worry about him not being able to handle it, mentally, emotionally and all those things and I know he’s looking forward to it.”

“Super excited,” Garcia said of his reaction upon hearing the news from Boone. “When they finally told me that I was going to get the ball for Game 2, what can I say? Just so excited about it. At the same time, very thankful for the opportunity and I will try to go out there and do the best I can.”

Overall, only Los Angeles Dodgers pitchers Julio Urías (20 years, 68 days) and Fernando Valenzuela (five times) were younger in making a postseason start among players born outside the U.S. Garcia, who stated he idolized Hall of Fame starter Pedro Martínez growing up in the Dominican Republic, reiterated that it was an honor to make pinstripes history.

Including a subpar outing at Fenway Park, Garcia finished the coronavirus-shortened 2020 regular campaign with a 4.98 ERA in 34⅓ innings pitched.